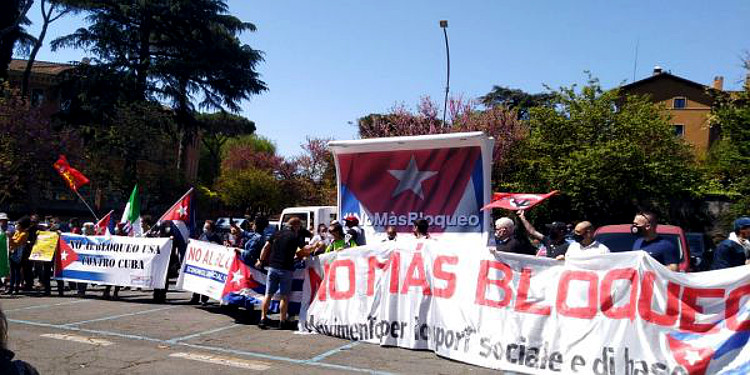 Today [24 April] in Italy, as in Cuba, France and other countries, Caravans are circulating in the streets against the US blockade that for decades has wanted to strangle the island that brought the Revolution to the US “backyard”.

In Rome, Milan, Naples and many other cities, activists in solidarity with Cuba have taken up the call to make this day a day of mobilisation and awareness-raising against the US blockade of a country that in recent months has confirmed to the world grappling with the Covid pandemic what solidarity means.

Solidarity with Cuba is a widespread sentiment that has grown during this period, when the
Doctors’ Brigades – also nominated for the Nobel Prize by a vast front of supporters – have rushed swiftly and gratuitously to where the Covid pandemic has plunged the health structures of several countries into collapse.

The fact that the United States continues to maintain a shameful and criminal economic blockade against Cuba, despite repeated motions calling for its lifting by the UN Plenary Assembly, is a horror that is becoming increasingly incomprehensible and unacceptable to anyone with any sense of justice or, if you will, common sense.