USA, Turkey and the Kurdish liberation movement in the stalemate of imperialism 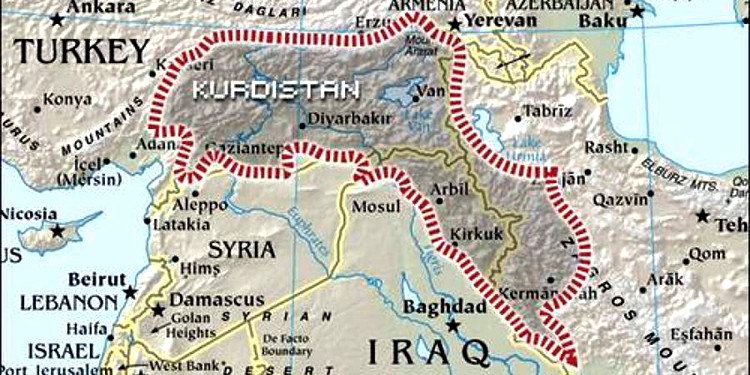 The umpteenth Trump’s “stop and go” on a delicate choice of foreign policy – in this case the “military disengagement” from the North-Eastern borders of Syria – is a demonstration of the strategic impasse that characterizes Washington not only in the Middle Eastern theater and not today.

This “stalemate” has produced in this case a split in the Republican establishment between those who harshly criticized Trump’s intentions – even after having taken up the cudgels for him from the possibility of impeachement – and those who expressed themselves in favor, as well as a substantial difference between the President and the Pentagon, as already happened with respect to possible military escalation against Iran after the shooting down of a North American drone on the soil of the Islamic Republic a few months ago.

Certainly, the pre-election environment – one votes in a year for the presidential elections in the United States ­– and the need to fulfil the promises of disengagement in some theatres of war of the United States troops, which were one of the reasons that made him gain consensus to win the elections, have their weight.

However, it does not seem that it is this last gesture or the state of negotiations with the Taliban that ensures “Orange Man” some winning cards to be played in the election campaign, especially if you have to deal not with a piece of the democratic establishment, but with an outsider like Sanders (health conditions permitting).

On the Middle East, the Trump administration has been characterized by two mutually linked choices of rupture with the Obama era: the unilateral exit from the Obama “diplomatic masterpiece”, that is, the signing of the Vienna Treaty on Iran’s nuclear power, which was to pave the way at the end of the sanctions for the Islamic Republic, and the complete alignment to Israeli and Saudi needs in the area, in their internal policies as well as in foreign ones.

These choices were at the expense of the Palestinian population, the Yemeni population and all those who gravitated in the sphere of Shiite political Islam.

The axes of the Trump administration’s policy in the Middle East region, were articulated in the “maximum pressure” on Iran, the attempt to establish an “Arab NATO” in fact in function of anti-Iranian and against the Shiite archipelago, and what was to be the “conference of the century” on the Palestinian question. But up to now they have been resolved in resounding failures, children of relations of power that see the former North American superpower as an actor no longer able to produce an effective break in the status quo in its favour, also because it is confronted in the area with subjects who do not want to be dictated by the political agenda of the United States but who defend their interests also with an “external” military projection capable of changing the order of things. This is the case of Russia which intervened in 2015 in the Syrian civil war (which Obama mistakenly robbed of “regional power”) or of the “Shiite Half-moon” in the fight against Jihadism in Syria and Iraq, and which is now the contemporary target of the Israeli strikes.

The plebiscite in the referendum for the independence of Iraqi Kurdistan, the lack of alignment of the Iraqi government with the wishes of Washington and its relationship with Iran, has created more problems than solutions from a situation in which it was the U.S. to “force” the invasion of the country in 2003, trying to redefine a hierarchy of imperialist command to Anglo-American leadership that has vanished in the meantime, and that has had in place as a recoil a development of the Islamic State of Daesh, escaped from hand to its creators.

It is interesting to note how the anti-Trump “republican front” has proposed sanctions and even the expulsion of Turkey from NATO, in case it follows up its plan of invasion which it has been pursuing for a long time for what concerns the Syrian North-East, and for which it is progressively building the conditions to implement it: the invasion of the Rojava, the installation of Syrian refugees on its territory with consequent ethnic modification with respect to the zones of origin of these, in fact, establishing a Turkish-Union protectorate on the one hand and annihilating one of the hinterlands – together with the Iraqi Kurdistan – of the Kurdish liberation movement which remains in fact one of the main enemies of the Turkish state since the beginning of the Kurdish insurgence in Turkey with the formation of the PKK in the first half of the eighties.

It is from the failed coup against Erdogan that the relations between the USA and this member of NATO are deteriorating, setting in motion a parallel rapprochement between Turkey and Russia: the story of the order of the Russian S400 (one of the major antagonists of NATO) and the consequent failure to deliver the American F35 to Turkey, gives the figure of the frictions that can turn into a divorce.

Of course, Erdogan is grappling with an economic crisis that sees no signs of counter-trends, with the electoral defeats in Ankara and Istanbul, and with a declining outcome of the project of neo-Ottoman influence that has suffered significant setbacks in Syria, Egypt (with the coup against Morsi) and Africa given the inability, among other things, to make Sudan for now a bridgehead for the continent as for a time seemed under Al Bashir.

Since the Turkish Premier cannot exclude “headers” to make up ground also in function of a growth of his internal consensus, as well as those of some North American Dr. Strangelove, the situation seems to be “in perfect stalemate”.

For what concerns the Kurdish movement, it is clear that the tactical unscrupulousness shown in trying to turn the situation created in Syria to its advantage – as experienced by other Kurdish political actors in Iraq – is showing its limits of perspective. Syria has not been “disintegrated” into ethnic-confessional homelands as Iraq has been – following, among other things, an old Zionist project – nor has it been eaten by radical Islam. This is also thanks to forces that, like the YPG, have become involved in the fight against jihadism, just as the Shiite archipelago – like Hiz’bullah – Russia, which has directly known Islamic terrorism in its homeland and sees the radical Islamic hotbeds still active in the Caucasus, and the “loyalist” army in Assad, together with the voluntary militias and Palestinian groups, have done.

To a minimally objective observer, the paradox appears that one of the most important political-social experiments in the area, such as the Rojava, and of the components that have most generously fought against jihadism, imposing what seemed, at a certain point, to be the unstoppable rise of the ISIS, depends in part on the North American military protection, which not only provided “buffer troops”, now withdrawn in two strategic points of the border with Turkey, but which has three bases in the Canton’s nerve centres.

The category of “betrayal” is never explanatory in politics, and therefore it is not worth using it, especially if one takes into account that the United States has always applied a sort of modern version of the “law of the desert”: the enemy of my enemy is my friend, and that historically they exploit “the freedom of peoples” for their own convenience: in the twentieth century they became champions of the Armenian cause against the nascent Turkish state precisely to carve out a role in the Middle East, John Reed denounced it at the time effectively at the Baku Conference in the Twenties.

It is certainly not up to us to make judgements on others who operate in contexts other than ours, but it is nevertheless necessary to show what are the problematic knots, knowing well that the need for an alliance to defeat a common enemy has historically shaped fronts that then in a different phase have overturned and that a changing situation on the ground, can give rise to as many “changing and trajectory” alliances.

As always, it is in the situation in which we find ourselves to act that we must express an orientation for coherent action which, in this case, can only be a project that separates the destinies of peoples from the protection of the different imperialist actors – in our case the EU and the USA – experiments with horizontal forms of cooperation within an “Enlarged Mediterranean”, which is first and foremost shaped by common battles and prefigures a prospect of political independence.

To do this, it is essential to have a toolbox that focuses on the use of the category of “imperialism” as it is articulated in the Third Millennium and what can be the strategic depth in which to place their path to liberation, as well as the development of an internationalism that denounces “here and now” the military-industrial apparatus and the tendency of our enemy to war at home: the European “militarist” oligarchy, the American military power and NATO, proposing adequate solutions and alternatives, starting with the separation from the current military alliances and warmongering.