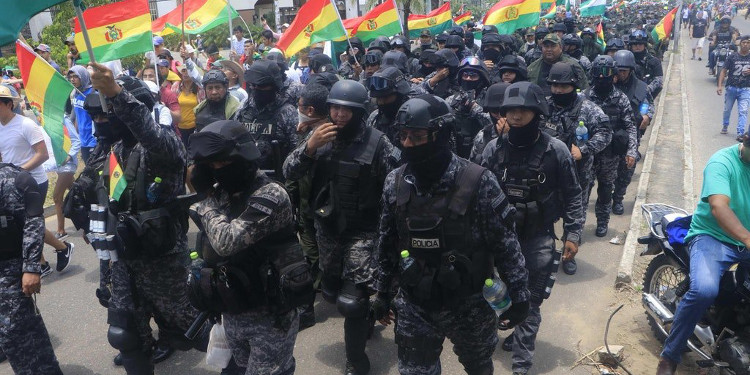 With the revolt of the police and the pronouncement of the army against the government, the democratic pronouncement of the elections won by Evo Morales is once again annulled in Latin America as it was done in Brazil with Lula and attempted in Venezuela where the response of force and people prevented imperialism from winning.

If there was still a need for it, this outcome demonstrates the nature of certain “popular” revolts as they are passed down by our media and which a certain left wing wants to believe in, namely instruments in the hands of national oligarchies and Western imperialism, the USA and the EU, which has already taken a united stand against Maduro’s Venezuela.

This blow to the popular and socialist movement in Bolivia takes place in a country where there has been balanced and solid economic growth in the last fifteen years, there is no social crisis like in the other countries of the continent, starting from Chile and Argentina and arriving in Ecuador, and where the defense of the environment has been real. Despite this, the military wanted to serve the ruling classes, which obviously still have too much power and not only in Bolivia.

In fact, violent demonstrations, starting from the area of Santa Cruz dominated by the white oligarchy and mestiza, theater of open racism against the Indians and their emancipation, forced President Evo Morales at first to convene new elections to end the fighting. A completely different reaction from that of Pinera in Chile, where in the face of popular protests a brutal military and police repression was unleashed.

What is happening in Bolivia is a juncture in the very tough class struggle taking place in Latin America in a context in which local bourgeoisie and US imperialism are trying to overturn the progressive wave of recent years but have suffered severe blows in the region in recent weeks. After having failed in Venezuela and Argentina, after having used all means in Brazil, they are now trying to regain possession of a strategic country like Bolivia given its enormous wealth of gold and lithium and its role in Latin American politics.

Therefore, the Rete dei Comunisti expresses its deepest internationalist solidarity with the Bolivian government and people, in defense of the right to self-determination and socialist democracy, and its deep conviction that this adventure promoted by imperialism will face another defeat because its crisis is a general crisis and it will not be possible to repeat the military regimes of the 80s in that continent. The Rete dei Comunisti invites all the popular and democratic communist forces to mobilize in defense of Bolivia and Evo Morales.