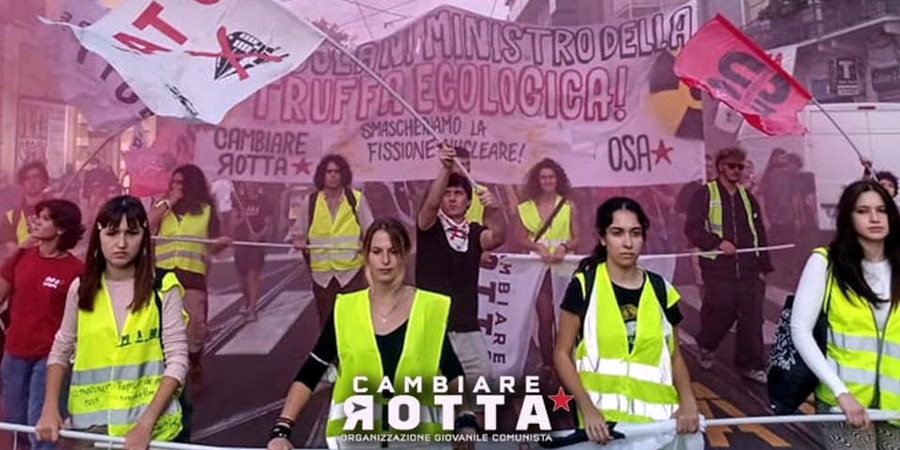 The disaster that struck the Marche region causing 11 deaths, missing persons and dozens of injuries is yet another judgement on the unsustainability for humanity and nature of the dominant development model. It is not the first and, above all, it will not be the last: from drought to increasingly uncontrollable weather events, the effects of global warming are now a fact of life that we have to come to terms with here and now, starting from territories devastated by decades of cementification and building speculation, abandoned to hydrogeological instability where the sirens of profit do not arrive, and assaulted, instead, by wild and irrational urbanisation processes that eat away at nature, devastating the countryside in large metropolitan areas.

Capitalism runs on a dead end track and does not stop, but accelerates towards the abyss, condemning the whole of humanity. It is the same logic of hyper-competition and profit, which has brought us this far, that mortgages any way out that is not outside this mode of production. We can see this in the criminal adventurism of the Europeanist ruling class which, in the name of a war to be won, has overnight sidelined, with the return to coal and regasifiers an ecological transition that was already based on enormous mystifications – above all the massive recourse to nuclear fission energy – and that was only justified by the European Union’s quest for energy independence in order to equip itself for multipolar competition, a competition that the peoples on both sides of the border pay for, amidst bombings, sanctions and high costs.

Capitalism at our latitudes has a well-defined face, that of the entire parliamentary arch – from Meloni to the Democratic Party (red-green pretenders included) – which embodies the policies of the European Union in Italy and which has assumed from first to last the warmongering and ecocidal choices of recent months, guaranteeing their continuity regardless of who wins the elections. We do not have before us interlocutors from whom we can demand change, much less from whom we can wrest a few insignificant corrections to the madness of this model, cultivating the illusion that they might somehow mark even a timid reversal of course. We are faced with the enemies and perpetrators of the climate disaster who are the first to draw insurmountable boundaries between the perpetuation of the current model of civilisation to catastrophe and the possibility, instead, of a different future for our generation. From war to exploitation to environmental devastation, everything is held together in capitalism and its configuration at home under the command of the European Union. It is up to us to take our destiny into our own hands, moving from anger and denunciation to facts, to the fielding of an all-out alternative hypothesis out of and against their model, which through organisation knows how to sediment the forces to break into history by truly changing course!