Solidarity with the struggling students. Repression will not stop us! 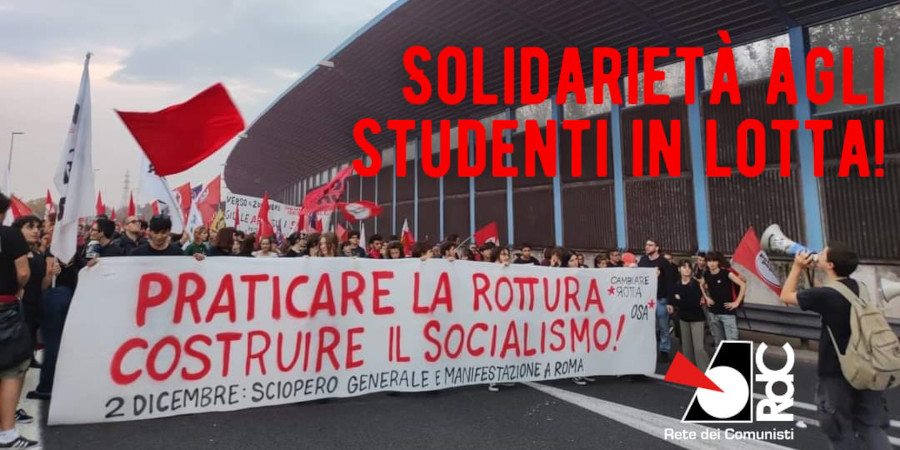 The installation of the Meloni government coincided with the first fall mobilizations of that new generation that does not bend to the logic of exploitation and “all against all” that capitalism would like to inculcate among the desks of schools and universities.

These collective consciousness-raisings, however, are beginning to put the forces of repression to work, with truncheons being raised on boys and girls yesterday all the way into the institutions of what should be a country’s highest places of cultural and scientific education, the universities.

The “reactionaries in suits” who have occupied more seats than usual in Parliament in this election round, applaud and call for the values of democracy against the social and political opposition mounting in the ranks of the boot, in this assisted on several occasions by the PD and the rest of the faux-liberal left.

But the democracy to which they all refer is a deception for workers and peoples halfway around the world when it supinely espouses the warmongering causes of NATO and drives the Euro-Atlantic axis to imperialist exploitation of territories and human beings of all colors, all ages, all religions, and all genders.

Yesterday’s Sapienza marches with Cambiare Rotta and this morning’s occupation of the Albertelli High School with Osa indicate that there is still a piece of the country that does not surrender to the social, environmental and cultural disaster to which this system would like to relegate humanity and especially the less affluent classes and countries.

Student participation in the direction of the development of schools and universities, as well as that of workers in the workplaces or the working classes in the life in the territories, is the only yardstick that can restore the degree of democratic participation in the life of a country. And this is what the boys and girls in struggle continually aim for in their demands.

The organization of radical paths and alternatives to the dominant political, ideological and economic system is the best news this country can receive, although this is unlikely to be broadcast by the big media, which is complicit in the political corruption that is rampant in the Western world. Yesterday it was the university’s turn, today the school, tomorrow the workers?

The battle of ideas for an overall system change goes through moments of hard confrontation with the class enemy, which has police and repressive legal instruments to deploy.

But repression cannot stop the organization and advancement of the path of change. We therefore express solidarity and closeness with the struggling students; the new world can only be born from the drive of the new generations that do not give up. The upcoming general strike on December 2 is a stage in this path.