“En colère!”: with the French working class against pension reform! 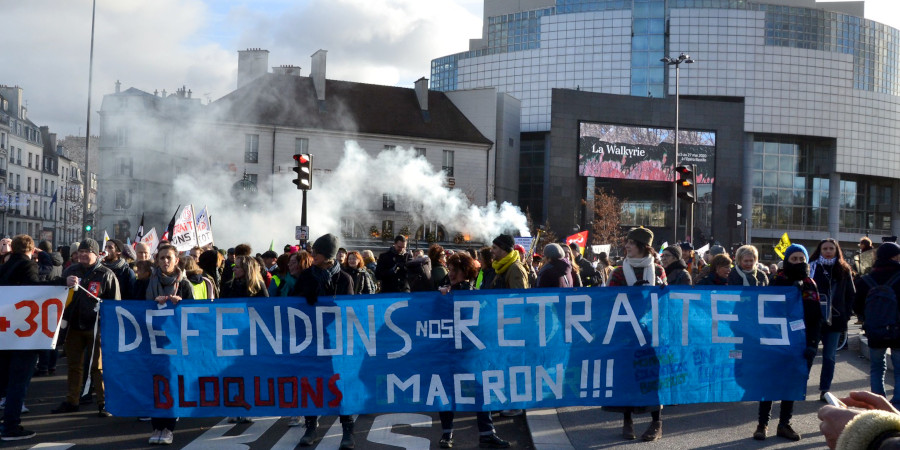 In his year-end speech, President Emmanuel Macron had said there was an urgency to reform a scheme that could lead to a 20 billion euro deficit in 2030.

“The goal,” said the president of the wealthy-who has always refused to reinstate the ISF, a kind of patrimony for the wealthy-“is to consolidate our pay-as-you-go pension schemes, which, without doing so, would be threatened because we would continue to finance on credit.”

The previous pension reform project, scheduled to start in 2020 during the first five-year term of Macron’s presidency, had actually been suspended due to the health crisis after a major round of strikes and mobilizations.

According to a poll by IFOP for Fiducial, two-thirds of French people would oppose the reform, to be precise, 68 percent of respondents.

On the very Tuesday of the announcement, in the evening, after a historic meeting, the leaders of the eight largest trade unions (CFDT, CGT, FO, CFE-CGC, CFTC, UNSA, Solidaires and FSU) proclaimed a first day of general strike and demonstration for June 19-with some 200 concentrations planned throughout France- , while the entire left-from the most moderate to the most radical-will support it, proposing their own first mobilization for this Saturday.

Let’s look at the main features of the planned reform.

The legal age for being able to access the “full rate” pension (that is, at 50 percent of the last transposed salary) will be moved gradually to 64, instead of 62, from its entry into force-which the government would like to be Sept. 1-to 2030.

Three months each year from Sept. 1, reaching 63 years and three months at the assumed end of Macron’s second – and final – five-year presidency in 2027.

The length of contributions required to qualify for the full-rate pension will be gradually increased to 43 years from 2027, accelerating the stages of the timetable envisaged by the 2014 Touraine law, which set this milestone, for those born on and after 1973, for 2035.

The reform envisages the extinction of the main “special schemes”: for workers in RAPT, i.e., the Paris metro, those in the electricity and gas industry, or Banque de France, for example.

Wear and tear factors-abandoned in 2017-should be reinstated, but with prior medical examination (rejected by unions) for those who move heavy loads, or work in penalizing postures, or are subjected to mechanical vibrations.

The government plans an elevation of minimum pensions, promising to raise them as of now to 85 percent of the SMIC, that is, the Inter-Category Minimum Wage, and that they will then start at 1,200 euros.

He also announced that he would introduce measures to protect the 60-64 age group-with compulsory hiring by companies beyond a certain number-or the possibility of being able to take part-time employment two years after retirement age, with the state willing to supplement the rest.

Early retirement at age 62 will be provided for those who are disabled, incapacitated and incapacitated at that age, a condition that affects about 100,000 new workers/employees every year.

The executive-which previously envisioned an extension of the legal retirement age to 65-will incorporate its reform into the forthcoming Social Security Funding Adjustment Bill to be submitted to the Council of Ministers on Jan. 23.

Without the support of Les Républicains, who have basically said they are in favor of the reform (given the age threshold raised to 64 and not 65, as well as the raising of minimum pensions) Borne will again be forced to bypass the parliamentary vote by resorting to Article 49.3 of the Constitution.

LR is the Gaullist-derived right wing with a governmental vocation but which is not inside the executive, historically in favor of such measures that as their leader Eric Ciotti told the Journal de Dimanche: “are in the DNA of the right.”

Marine Le Pen’s far-right RN, with its 89 deputies, said it was against them.

The 149 deputies of the NUPES, which groups all the forces of the parliamentary left, support the mobilization.

In France, a familiar story is being set in motion again. With the grève général against pension reform on Thursday, January 19, and the day of mobilization on Saturday, January 21, a season of generalized social conflict seems to be restarting, accompanied as always and increasingly by the media and political terrorism of an elite in crisis of legitimacy and oxygen.

According to Frédéric Dabi, director general of IFOP, the climate is as tense as it was in the fall of 2018, on the eve of the development of the gilets jaunes movement.

As early as October 2022, a survey carried out by various institutes returned the image of a country “angry” because of economic concerns: 36 percent of respondents said they belonged to a very angry and protesting France, 58 percent to a disgruntled France.

Ahead of what is now certain to be only “the first day of strike” of a black period for the Hexagon management, the executive has already begun to delegitimize the protests, speaking of a society taken hostage by workers. Responding to the unions’ promise of “a powerful long-term mobilization,” Prime Minister Borne enjoined them to “not penalize the French.” As if those responsible for the collapse of the lives and expectations of millions of citizens were not actually the social butchery.

As we approach a period of possible rising social temperatures, however, we feel it is important to point out some more “internal,” trade union, characters that may perhaps appear to be insider but are crucial for reading the coming period.

First of all, we cannot fail to appreciate the datum of the generalization of the clash, the effort and the capacity of the going beyond one’s own category, beyond one’s own sector, in view of a battle – pensions in this case – that by its nature is a claim of all workers. A union that is possible, necessary, built on the battlefield, of French workers before their own unions.

A convergence in analysis and social demands that can only increase the force of impact, promoting in fact solidarity and mutual aid between categories, starting with the hospital sector that has been in permanent struggle for years, along with the world of schools and the entire civil service. We are witnessing strategic sectors, such as transportation and energy, showing willingness to help others more in need, with less impact in the daily lives of citizens.

We cannot fail to mention the example of the refineries, which measured their specific weight a few months ago when France literally ran out of gasoline. The mere call to strike by the oil industry unions, which are already looking beyond the national day of mobilization and want to make the movement last a long time, has struck terror in the boss and government ranks.

Transportation, education and energy are likely to be the sectors most affected by the strike.

Rail and Paris metro traffic will be heavily disrupted: trains will tend to be stopped, as will the metro, except for the automated lines.

Air traffic will also be impacted, to a relatively lesser extent.

Three-quarters of teachers will be on strike.

Energy supply will be heavily curtailed, “to the point of blackout” as FNME-CGT leader Sébasien Menesplier stated.

The scenario for refineries seems to repeat what we saw in action last fall.

It starts with 24 hours of strikes proclaimed for the 19th, 48 starting January 26, and 62 starting February 6.

As Eric Sellini, CGT national coordinator for Total Energie, put it, it will come down to the “shutdown of refining installations” if it is necessary.

On top of that Health and even the largest union lockout in the police!

We think that what will develop in France will be a mighty mass movement, fueled by a sense of dissatisfaction with the increasingly difficult conditions of existence due to galloping inflation and the austerity policies promoted by the European Union.

It will be a mobilization where combative trade unionism, a political representation of the subordinate classes worthy of the name, and youth organizations will play a key role capable of transforming underlying dissatisfaction into disruptive collective action.

Against the pension reform of the president of the rich, long live class anger and social revolt!