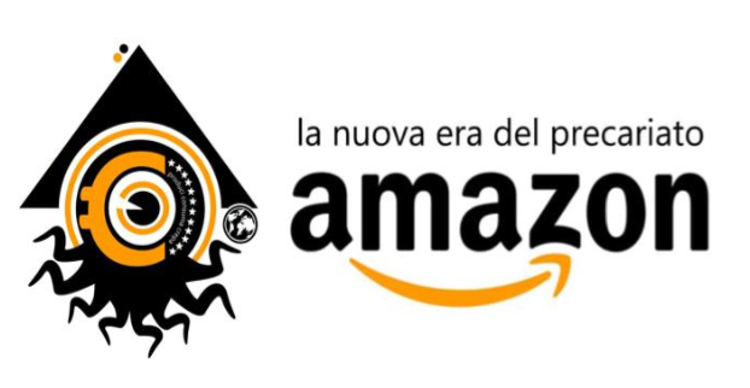 Logistics, already a strategic sector within the systemic crisis in which the capitalist mode of production finds itself, has seen its centrality further increase globally with the outbreak of the pandemic. In particular, the e-commerce giants, thanks to the foreseeable increase in online purchases and the strong push towards digitalisation that the pandemic phase has facilitated, have seen their profits increase exponentially, Amazon above all, arriving at tripling its net profit in 2020 and reaching the highest profits in its history.

The logistics sector is particularly important in Italy because of the country’s position in the EU’s manufacturing reorganisation process and its consequent deindustrialisation: the socio-economic crisis, caused by the repercussions of the Covid restrictions on workers, primarily those in the retail sector, has instead strengthened Amazon’s position in Italy, which this year has opened 1,600 new jobs and announced the construction of two new sorting centres

Almost all the newspapers have welcomed and relaunched the news with favour, keeping silent about the real social costs, which we young people will be the first to pay, of the Amazon model, based on the privatisation of cutting-edge technological research, particularly in the field of automation, which allows it to be hyper-competitive on the international market, increasing productivity and lowering labour costs, to the detriment of workers’ conditions and environmental impact; this in the silence of the mainstream trade unions and institutions.

An example of this is the recent case of the new sorting centres, one in the province of Modena, where, despite the urban planning law of the Emilia-Romagna region talking about ‘zero land consumption’, the construction of the plant was approved as an exception; the other in Novara, where the centre is part of a plan to redevelop a rural and wooded area.

Consistent with the market’s need for a green image, Amazon has also launched a series of measures to reduce its environmental impact. In line with these policies, both plants are presented as eco-sustainable: however, zero emissions are mentioned for the single warehouse and not for everything that revolves around it. The news was picked up with general enthusiasm by the press at the same time as a study published in Lancet Planet Health 2021 ranked Brescia and Bergamo, the epicentre of the first pandemic wave, and other cities in the Po Valley, as the European centres with the highest number of premature or excess deaths linked to air pollution, where there is a high capacity for fine dust to penetrate the respiratory tract. In May, an epidemiological study on the correlation between air pollution and the risk of infections of the lower respiratory tract, coordinated by the Superior Health Institute and the National System for Environmental Protection, also started in Italy.

The need to remain competitive and make a profit inevitably clashes with environmental and health protection, and Bezos’ statements about reducing CO2 emissions in the coming years are nothing more than a bland greenwashing operation.

But it could not be otherwise: solutions such as the green economy or the concept of sustainable development only open up new markets in which pushing technological innovation, hiding the real irremediable contradiction between the infinite reproducibility of capital and the physical limits of nature, shifting the problem from causes to effects.

We see the same kind of subservience once again in the positions of the CGIL trade union at the table undertaken by Amazon for the negotiation of the new labour contract, which caused the exodus of four hundred workers to USB trade union: to the proposals that provide for the nullity of the option to work on holidays and an increase in working hours and temporary work from 30% to 50%, the mainstream trade unions, with the CGIL at the head, did not oppose, despite the net worsening of working conditions to which they will lead.

But what is a real limbo of exploitation and precariousness begins with the system of cooperatives: Amazon, rather than employing the workforce directly, prefers to rely on them, with the aim of freeing itself from legal responsibilities. Most of these workers are employed under precarious fixed-term contracts of about two months, which are most often not renewed, creating a circular migration of workers from one cooperative to another. In addition to this, on-call work, which allows for a constant flow of labour, is also delegated by Amazon to temporary employment agencies, which are in turn subordinated to the interests of the multinational.

The direct impact on the working conditions of logistics workers, which the surge in the growth of e-commerce has had with the outbreak of the pandemic and its associated restrictions, in parallel with the retail crisis, has benefited in turn from the opportunities for restructuring and experimentation at work that capital has seized at the moment of crisis, such as the acceleration of digitalisation or smart working, which have moved mass consumerism into the home, consistently contributing to the atomisation and disintegrative tendencies of the social body.

It is not surprising that these processes have been accompanied by a narrative on the part of the political class, supported by the main national and local media, which, since the lockdown, has told a mystified reality, centred on the opportunity of rediscovering the domestic dimension, making the home one’s office, library, school, gymnasium, garden, buying everything you need online and, thanks to Amazon’s automated warehouses, receiving it comfortably at home the next day, thanks also to the heroic work of the delivery men, portrayed as the new neighbourhood postmen, but forgotten with the end of phase 1.

This evident classist rhetoric hides a very different reality, and the struggles of the logistics workers since March have demonstrated this: the speed with which Amazon is able to deliver its products derives from the gruelling rhythms to which the thousands of logistics workers are subjected, of which the messengers are only the last link in the chain in the Chinese box system of cooperatives; the algorithm that makes the catalogue’s proposals personalised, anticipating and generating the wishes and needs of each individual customer, does not live a life of its own, but is constantly trained, corrected, improved by thousands of underpaid workers.

It is also thanks to the lowering of labour costs and the increase in productivity that Amazon is able to be so highly competitive on the market: an example of this is the launch of the online pharmacy in the United States at the height of the pandemic crisis, which makes it convenient for those who do not have health insurance to subscribe to Amazon, which offers huge discounts on medicines, thus making up for the lack of a welfare state

Technological research towards automation, in which Amazon is at the forefront, is only directed towards profit, to the detriment of the workers, as is evident from the machines already introduced in their warehouses, capable of signalling in real time with a red, yellow or green light the productivity of each individual worker compared to the established average; or from various patents filed, among which the best known is that of the electronic bracelet, capable of monitoring and timing the movements of workers, to speed up the search for products; but there is no lack of patents for underground, underwater or air warehouses.

But the patent system not only guarantees huge profits for private individuals, it also expresses the highest point of the contradiction between the level of development of the productive forces and the current production relations. The valorisation of social intelligence for the purposes of competition between private individuals ends up being an obstacle to the satisfaction of the needs of the community, which the technological development achieved would be able to offer.

This is a contradiction that is now made evident by the development of the vaccine against Covid, but which, given the strategic importance of technological innovation in international competition, embraces all sectors, especially those of communication and knowledge, creating a real ‘knowledge economy’, where it is no longer possible to think of the latter as separate from the production sector. This generates a new paradigm and, alongside the traditional one, a new working class, made up not only of logistics workers, central to global distribution, but also of ‘mental workers’, of whom knowledge is an essential element for improving productivity and competitiveness.

A system that finds its complementarity in the model of higher education, where the management of knowledge has been subordinated to the priorities of the market, with the entry of the private sector into strategic training and research sectors, and in this Amazon is no exception

The Amazon model is the near future of our generation

A generation betrayed by a narrative that continues to be fed to us in its double face: in universities, where we are educated to the value of competition, and by the mass media, which bombard us with celebrations of beautiful stories of individual achievement through self-denial, sacrifice and hard work, despite the fact that reality itself is now dropping the mask of false meritocracy, which has covered the experiments on us that have been made for the future labour market by a political class enslaved to the interests of capital: We will be the ones who will have to deal with future welfare cuts, with a labour market even more based on precariousness, unemployment and ever higher living costs.

That is why the struggles of the logistics workers are also ours: the exploited delivery boy is a victim of the same system that, through on-call work, takes over the workforce of the younger generations, forming the delivery boys of the future, the precarious workers of tomorrow. Welding the struggles between generations, through practices of conflictual unionism and stripping the class enemy of its ideology is necessary to fight at all levels against a model that is based on exploitation, precariousness, flexibility and that, at a time when the margins of redistribution are reduced, shows its true face, violent and voracious towards the weakest categories.

The Amazon model is capital’s answer to the crisis of civilisation we are experiencing, but ours is the organisation.