The lame fate of the next government 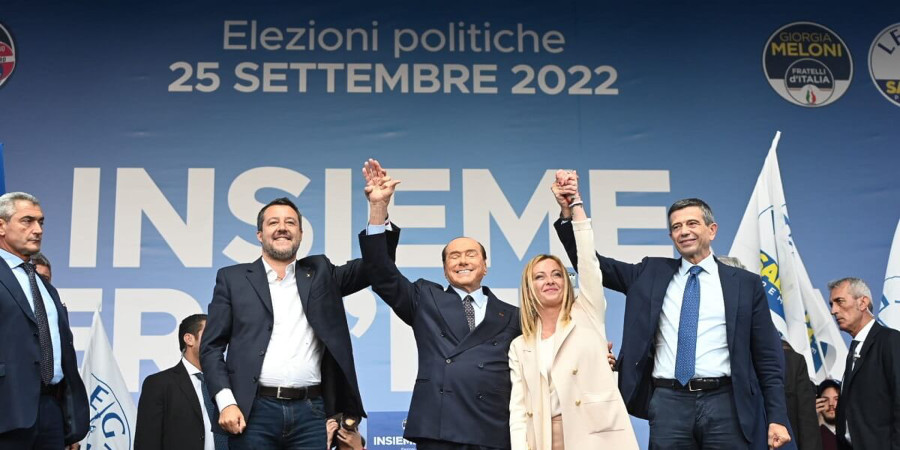 One thing was certain even before the vote: whatever government had emerged from the majority that won at the polls on 25 September would have had to face a dense agenda, in an unprecedented period, in order to respond to the wishes of Brussels and Frankfurt on the one hand, and Washington on the other – almost never coinciding – in addition to the immense problems posed by the crisis.

And in this narrow path the ‘Meloni government’ will – perhaps – begin to take its first steps. It will have very narrow margins of manoeuvre that will predictably soon cause the usual erosion of the electoral consensus accumulated by standing in sham opposition, thus deepening a political crisis whose timing and manner will be quite unpredictable.

The current situation of economic stagnation is indeed moving towards recession.

The Fitch rating agency’s gloomy forecasts for GDP in 2023 are just the latest chapter in a series of downward revisions initiated by a host of think tanks and rating agencies.

The ‘mild recession’ of which Confcommercio spoke a week ago is an oxymoron, a contradiction in terms, drawn up to downplay a situation that is far less than rosy.

According to Sunday’s Sole24Ore, ‘many observers predict a negative sign for the last quarter of the year, with the result that official estimates for 2023 will not go beyond 0.7-0.8%’.

This Friday Moody’s rating is expected, which already sees Italian debt at the last step before the level of securities considered most at risk, in jargon ‘non-investment grade’.

And as we know, the markets’ vote heavily influences, in the former western democracies, the result that comes out of the polls. So much so that, for some decades now, it has been said that ‘sovereignty’ lies in the markets, no longer ‘in the people’.

The signs of a slowdown that precedes recession are already fully visible in the basic sector of every economy – manufacturing – which has grown by a mere 1.2% in seven months due to a lacklustre economic situation, because even before the escalation of the war last February, certain phenomena such as inflation and the interruption of many production chains were becoming chronic.

The soaring prices of energy, and cascading energy prices of all others, as well as the violent monetary tightening after years of quantitative easing, have given the final blow to the illusion of a rapid post-covid recovery for an industrial economy that, in any case, had never reached the levels before the 2007-2008 crisis. Paying the highest price are naturally the most energy-intensive sectors.

One detail that is often underestimated: the cost of energy for Italian manufacturing has exceeded 76 billion, i.e. almost 50 billion more than in the same period of 2021, tipping the trade balance from a surplus of 37 billion to a liability of almost 14.

Translated: the cost of energy annihilates a country system – linked mainly to Franco-German value chains – that had made the export-oriented strategy of low value-added products the alpha and omega of its industrial policy.

Benefiting from this, as far as gas is concerned, for example, are mainly two non-EU NATO countries: Norway and especially the United States, which sell us three times more shale gas than we used to pay from Russia.

Compared to pre-crisis prices, the values (Pun, single national price) have multiplied almost ninefold in the case of electricity, sixteenfold in that of gas, which went from 12 euros per MWH in September 2019, to almost 200 today (after even higher peaks)!

And here we can understand the short-sightedness – let’s say – of not having initiated any ‘ecological transition’ in time, which, on the contrary, will be partly ‘replaced’ by coal, shale gas and even a return to nuclear power.

An idiocy, therefore, not only with respect to the ecological infarction of the planet, but also for the economy tout court, and which goes hand in hand with the choice to privatise the energy market.

If France has re-nationalised EDF and Germany is doing the same with the energy giant Uniper, here such a choice is still being branded as Vetero-Bolshevism!

And bills, as of 1 October, are set to rise even further, and not by a little, while the phenomenon of ‘arrears out of necessity’, even for condominium users, already appears to be increasingly impacting.

Year-on-year inflation in August reached 8.4 per cent in Italy, and is set to rise; it has reached levels not seen since 1985, more or less on average with that of the eurozone.

We could go on, but there is no need.

In a nutshell, the situation is bad, and without resolving the causes that generated it (war and speculative mechanisms typical of the private energy market first as weight and last as time), our country will be the crock pot between the EU’s iron pots – Germany and France – and will remain at the pole suffering the conditions that will be imposed on it for the relaunch of the Franco-German axis.

The probable future Prime Minister will have to face an immediate obstacle race that includes the approval of the Budget Law in record time: theoretically the Parliament, which will take office on 13 October, should send its own budget programme (Nadef) two days later to the EU, which will slip but in any case must be completed in less than a month, and will naturally be under ‘special surveillance’ (both because of the weight of the public debt and because of the ‘uncertain’ nature of the ‘new political class’).

Let’s just say that he will have to do a simple copy-paste of what the EU proposes to him, on the strength of the Pnrr’s stringent mechanisms (loan instalments versus ‘reforms’ indicated one by one).

In November there will be the EU check on the accounts. An important check because the ECB makes eligibility for the Tpi (the new anti-spread shield) conditional on the achievement of targets and milestones – i.e. the qualifying points – of the NRP, as well as the absence of macroeconomic imbalances.

The Commission will predictably be rather taxing in wanting to see the ‘recommendations’ made back in May fulfilled, and will in fact examine the Budget Law and the progress of the NRP at the same time, as a precondition for access to the third tranche of ‘aid’ of the Next Generation EU.

Fifty-five ‘targets’ are to be met by the end of the year, 29 of which were probably achieved by the outgoing government.

One of the toughest hurdles will certainly be the passing of the ‘competition law’, which will also affect the interests of the social base of the centre-right coalition: think of the beach concessions. It will be a bloodbath on public concessions.

It is not peregrinatory to think that, as for the Budget Law, someone will give cogent ‘indications’ on how to achieve the fifteen or so targets of the NRP still to be completed.

With the recession coming, the imposition of debt reduction in increasing percentages against a falling GDP, and the very strict parameters set in Brussels to fall into the category of the saved rather than the submerged, it is clear that the room for manoeuvre will be very narrow.

They will probably get even thinner, bearing in mind the need to perpetuate some very pale measures that the previous executive had taken to alleviate the growing impoverishment: the 2% tax wedge cut for incomes up to 35,000 euro, the conversion of the Dl aid-ter with the latest support against the high energy price, indexation of pension cheques, the redundancy fund, etc.

Not to mention a very long series of ‘aid to businesses’…

Let it be said in passing: as of 1 January next year, we will return to the Fornero law in the raw, scrapping ‘quota 102’, ‘women’s option’ and ‘Ape sociale’.

As far as foreign policy is concerned, the eighth package of sanctions against Russia will be under discussion in the EU, and possible further escalation, taking into account the quantum leap (and risk) after the approval of the referendums of accession to Russia of the two self-proclaimed republics of the Donbass and the other territories now under the control of the Federation.

For the two European Councils scheduled for October, there will be a ‘forced’ sharing between the outgoing and incoming governments, but it is clear that the decisions that will be taken will certainly not be ascribable to ordinary administration: Giorgia will dance to the music that Draghi will play.

Already in the first few months, therefore, the new executive will have to stick its neck out to the Euro-Atlantic double noose, displease a not insignificant part of the social bloc that voted for it, and come to terms with an overheated social temperature.

On 2 December, there will be a general strike by all grassroots and conflictual unionism, but the mobilisations against the high-bill price and the student movement may hold surprises in store. Positive ones, from our point of view.

Slogans à là Meloni will be of little use this time, and any possible, however improbable or unrealistic, attempt to ‘raise one’s voice in Brussels’ will not be tolerated.

On the other hand, Ursula von der Leyen had already warned about the ‘tools’ the EU has at its disposal, exhibiting the most boorish loan shark logic that an ordo-liberal tie-breaker can flaunt.

Meloni, before she becomes PM, is already a lame duck who will have to reckon with her allies in a knife-brother logic, with the typical irrational dynamic that characterises the current politicians, as already demonstrated by the paroxysmal election of the President of the Republic.

The timing of the future government crisis is certainly not foreseeable, and it is clear that the task of a social-political opposition – in this case totally ‘extra-parliamentary’ – is to accelerate the process of disintegration of the executive before it is even born and to build an alternative to a post-fascist jumble that will stand on spit.

Not to try would be a mistake worse than a crime.