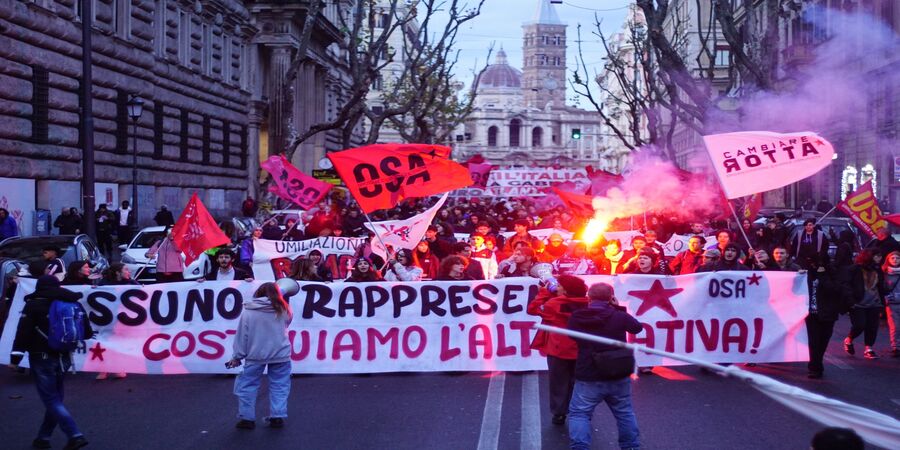 We are young people, students and precarious workers who took to the streets on December 3 in Rome responding to the call of confrontational unionism after the December 2 general strike day. We are the communist and student youth organization that animate the struggles inside schools, universities and in the streets of our cities.

We felt the need to promote a moment of national confont to affirm a clear concept: No one inside this parliament, whether majority or minority parties, represents our anger and our aspirations for change; we build the alternative in the struggles!

Almost three months after the September 25 general elections, the new political-institutional set-up has clearly emerged. On one side is the right-wing, Meloni-led, FdI-driven government, which has already given a taste of what will be the crisis management tools and policies that await us in the coming years. On the other hand, the facade opposition of PD and 5 Stars, basically aligned with the majority on all basic issues, starting with unquestioning loyalty to the Euro-Atlantic bloc, a mortal mortgage on any prospect of redemption and alternative for young people, workers and the working classes.

The extremely high level of abstentionism at the polls, which reached 36 percent and was the result of 30 years of neoliberal and anti-people policies carried out across the board by governments of all colors, has produced a parliament that in its entirety represents the perfect continuity of the Draghi agenda. That is, the 30-year EU agenda declined in the current phase, made its own at this round by the right and by Fratelli d’Italia, winner of the elections and majority shareholder in the government.

Indeed, the other side of the coin of abstentionism has been the success of the only party in the previous parliament that kept – only formally – in opposition to the Draghi-supporting pile-up and passed itself off until yesterday as an anti-establishment proposal, capitalizing on the social discontent in past years intercepted by Salvini’s League and especially the 5 Stars before burning all credibility at the government trials.

Already in the home stretch, however, Meloni had thrown away the mask on her anti-system vocation, reassuring in every forum and at every level all those actors that if Italy deviated in the slightest from the tracks predetermined by Brussels and Washington they had “the tools to intervene” – as Von der Leyen warned – thus the European Union, NATO, the big financial groups and all those supranational bodies that bind the country’s policies, with the blessing of Mattarella and the entire Italian political class sitting in parliament.

In a scenario of an unprecedented crisis for Western capitalism, in the midst of a wartime, war economy, between inflation, carovita and attacks on wages, income and labor rights – in a scenario in which a crisis of systemic character of this model has become apparent and is being entirely dumped downwards – we find ourselves managing this crisis the most reactionary and retrogressive expression of our ruling classes, disinclined to the use of any instrument to suppress dissent and ensure social pacification, and for this reason accepted and fully integrated into the establishment, in the knowledge that in the months ahead there will be all the potential conditions for a resurgence of social conflict in our country as well.

With this government – let us look at the migrant issue – the management of the crisis through the intensification of class warfare from above will also be accompanied by a further barbarization already produced overall by the West – where to give just one example the right to abortion in fact is still all to be won – giving back space to the false opposition of the left, PD and the like, on the issues of “civil rights” flaunted instrumentally, and only in words, in order to head progressive battles to cover up the worst anti-grassroots policies that they have carried out in these thirty years as much and more than the right, favoring their total clearance first and preparing the ground for discontent and social intolerance on which to proliferate.

It is on the basis of pointing out, without any ambiguity, those who are our class enemies that we are called to build the real opposition to this government, an all-out opposition to be continued to strengthen in schools, universities, neighborhoods and workplaces, to be taken to the streets in a perspective of radical rupture with the failed model represented in Italy today by the Meloni government. It is on this terrain-the same where even on the level of political representation with courage and coherence hypotheses truly breaking with the establishment are being measured and growing-that we can rekindle social conflict and point to a perspective that is “outside and against” the Euro-Atlantic dead end.

We are convinced that we are not the only ones who believe in the urgency for the younger generations to bring together the different struggles that cross the country from north to south, the national assembly on December 17 in Bologna is meant to be a first moment of confrontation and relaunching towards a new year of struggle, organization and project for an alternative to the misery of the present. 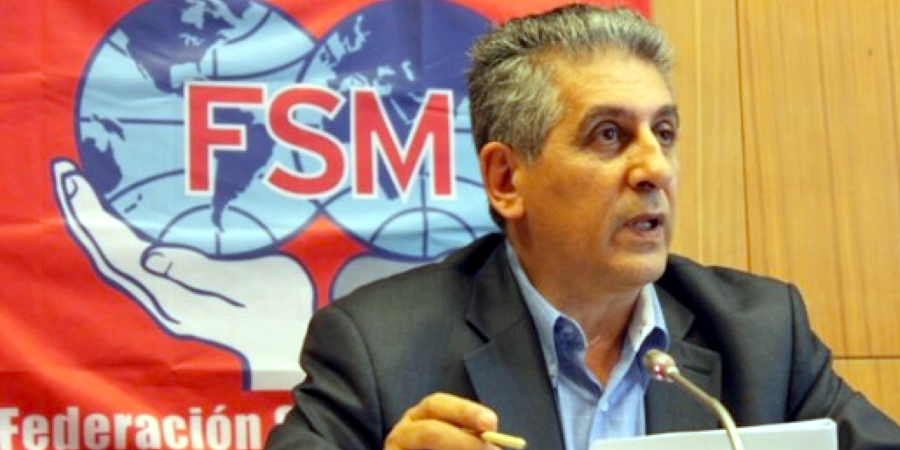 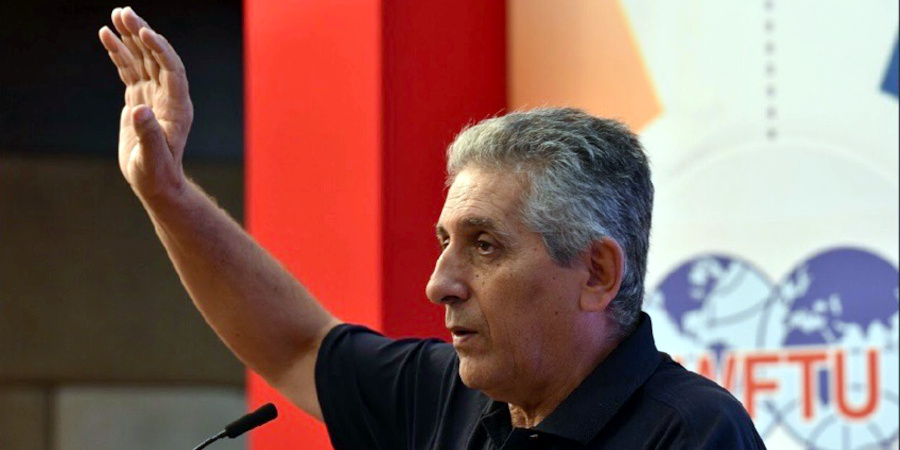 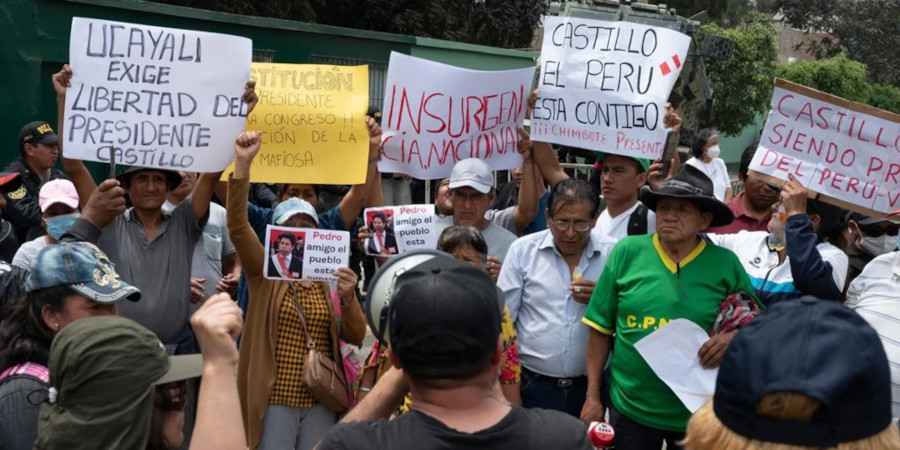 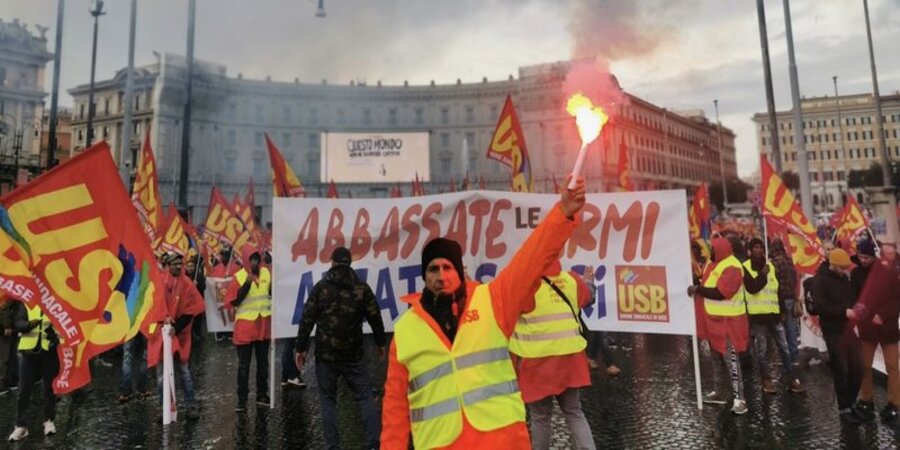