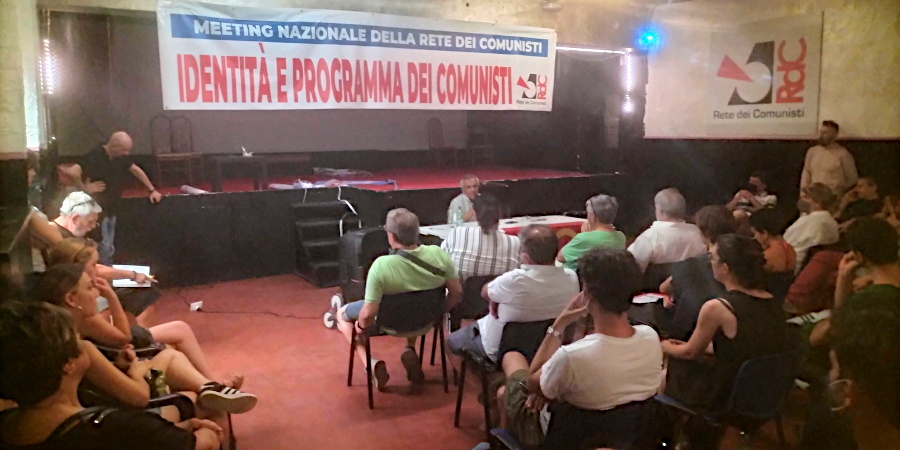 On Sunday 3rd July, the Meeting of the Rete dei Comunisti concluded in Rome.

A meeting that took place over three days, in which public debates and the discussion of the various working groups on different issues alternated; the first open to all and sundry, the others ‘reserved’ for members of the RdC.

All three public debates were streamed on the RdC’s channels, and are available.

The working groups have finalised an internal discussion process, the results of which will be made public in September, and on which the organisation will call for a debate that will hopefully be as broad as possible.

The Meeting went beyond expectations, both in terms of the wide participation and the quality of the debate that characterised both the public confrontation initiatives – Friday at the House of Peace and Saturday at the c Intifada – and the fruitful internal discussion (without neglecting the recreational moments that made the days less demanding and the torrid heat relatively more bearable).

The meeting was a moment of verification of the process of building a political subjectivity committed on the different fronts of the class struggle in our country and at the same time aimed at developing a work on oneself that with last year’s 4th National Assembly began to see its first fruits, further matured in the course of this year.

The work on itself, for the RdC, is a work in progress aimed at the formation of an organisation capable of facing the challenges of a political phase that has radically changed since the West’s precipitous flight from Afghanistan last August and even more so with the escalation of the war in Ukraine since the end of February this year.

That is why the meeting was also a sort of hinge between a significant amount of political work carried out over the past year in different areas, and the construction of a political agenda for the autumn that is already taking shape in recent weeks.

A political agenda to come that draws on the experience gained mainly on three levels:

An overall political work – that of the Rete dei Comunisti – developed in strong dialectics with the most active parts of the social bloc of reference and the other experiences with which they have convergent objectives, and which has never shied away from fruitful confrontation.

An activity conducted with the awareness that there can be no process of affirmation of the demands of the subordinate classes without the development of a strategic hypothesis capable of effectively confronting the challenges that a world in profound transformation places before us.

In order to do this, it is first of all necessary to reject ideological subservience to a capitalism that, over the past 30 years, has tried to represent itself as humanity’s only destiny, seeking to eliminate from the horizon the possible construction of an alternative to its world.

This ideological breakthrough operated by the ruling classes has not spared even the ‘radical left’, which is often incapable of giving a correct interpretation of the changes taking place and articulating a consequent praxis, even when – in certain cases – neo-liberalism has shown its proclaimed failure.

Faced with the different systemic short-circuits that the crisis of the capitalist mode of production generates – from the increasingly explicit tendency to war to the ecological infarction of the planet, from the regression of values that the decline of the West brings with it to the growing immiseration of the population even within the imperialist metropolis – the reasons of the communist variant will be able to acquire ever greater legitimacy in the eyes of the popular classes.

A hypothesis that, we are certain, will have to assert itself in pushes and pulls among the ranks of the subalterns, even against the reactionary plague, whatever form it takes, and the preventive criminalisation that will be promoted by the ruling classes.

The work of communists must be aimed at building the subjective conditions for them to play a general role in the development of the contradictions that this system produces.

To build an organisation that is a ‘collective political brain’ capable of facing theoretical challenges and proposing an organic programme of transformation, capable of developing an appropriate method of work, capable of shaping a body with the necessary articulations to develop a real mass line, and at the same time imposing militancy as a way of life within its ranks, an organism that, working on itself, increasingly seeks to immunise itself from the pathologies of decadent capitalism and its ‘regressive progress’.

The days of the Meeting confirmed that we are on the right track on a non-linear and all uphill path, in which perhaps more than ever the alternative for humanity is between socialism and barbarism.